“The generation most targeted for abortion reject the Biden Administration’s recklessness with their lives when it comes to Chemical Abortion Pills,” said Students for Life of America’s Kristan Hawkins. “Almost 9 in 10 take issue with the policies pushed by Biden’s team of abortion extremists who advocate for policies putting women at risk of injury, infertility, death, and abusers, who use the drugs on women without their knowledge or consent. And more than 9 in 10 support specific health screenings to protect them.” 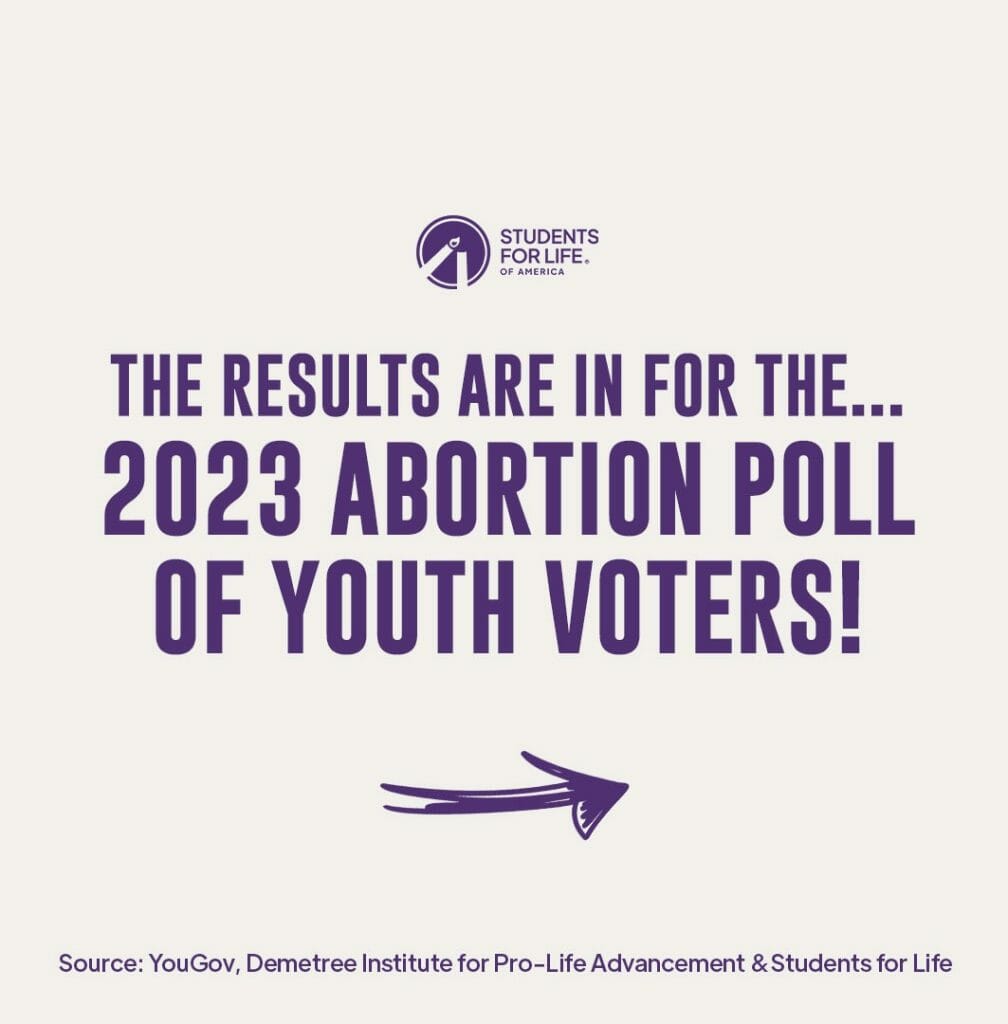 INTRODUCTION: Over the last four years, Students for Life of America/SFLAction has been tracking the abortion viewpoints among what is now the largest voting segment in society at about 31%. Our analysis, located at SFLA’s Demetree Institute for Pro-Life Advancement, illustrates both their abortion point of view and impressions of SFLA’s policy and programming, with the goal of effectively reaching the generation most targeted for abortion.

Given the influence of mainstream media and billionaire abortion vendors pushing both false information and pro-abortion propaganda, cutting through the noise of social networks requires precise messaging and knowledge of our audience – a peer group that includes most of the team at SFLA & SFLAction. We care because they are our friends, family, fellow students, and neighbors. As we’ve noted before, “The Pro-Life Generation is poised to carry considerable weight in elections to come. The policy they prefer is likely to become law.”

This year’s polling looks at the legislative conversations currently underway, asking whether the media hype that it’s all-abortion-all-the-time for Gen Z & Gen Y voters holds up when faced with facts.

In early January 2023, YouGov/Vinea Research interviewed 1,216 registered voters between the ages of 18-41 (Gen Z and Millennials) via a 5-minute online survey. The sample of 1,216 was then matched down to a sample of 1,000 to produce the final data set. Respondents were matched to a sampling frame on gender, age, race, and education. The frame is a subset of a politically representative “modeled frame” of adults, based upon established methods for these types of surveys: using exit polls and surveys, weighting using propensity scores, applying logistic regression estimates, grouping into deciles, and post-stratification. The margin of error for this study is ± 3.37.

Hans Plate, President of Vinea Research, was the research liaison, working closely with SFLA and YouGov in all aspects of the research. To contact Hans for questions on methodology, survey design, and results, email [email protected].

Not only do Chemical Abortion Pills place women at risk of injury, infertility, death, and abusers, NIH-published studies such as this one indicate they pose a risk to the environment as well. 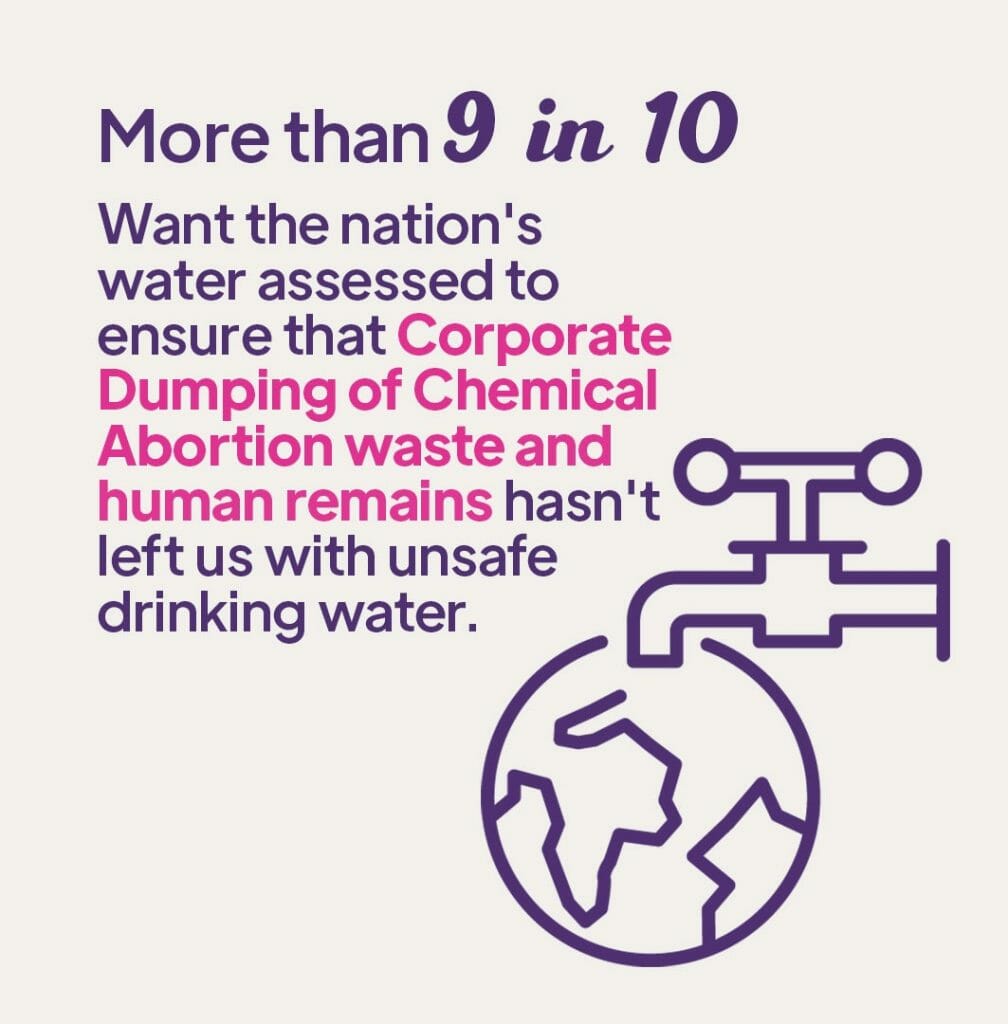 More information on the broader project can be found here, but short-term plans are underway, including:

STEP ONE: Students for Life of America and Students for Life Action have been leading the call for an Environmental Assessment of the impact of Chemical Abortion Pills along with tainted blood, tissue, and human remains in America’s wastewater system. This resonates with environmentally conscious Gen Z & Gen Y voters. Fewer than 1 in 10 wanted to ignore the potential dangers, with 92% agreeing that this is somewhat to extremely important, with 30% choosing extremely important.

HISTORIC LEGISLATION MOVING FORWARD: Students for Life Action is already getting traction on our calls for protecting the environment from Chemical Abortion Pill-tainted blood, tissue, and human remains. West Virginia is the first state in the nation to file a bill calling for Red Bag Medical Waste requirements, and as Politico reports, “The next abortion fight could be over wastewater regulation.”

ELECTED OFFICIALS TAKE NOTE: From the 2022 poll —  “Standing strong against reckless No Test, Online Chemical Abortion Pill sales and distribution is a winning issue. Almost 7 in 10 Millennials and Gen Z are more likely to support a candidate who supports laws that require in-person medical care and testing before and after the sale of dangerous Chemical Abortion Pills.”

On the Nuanced Abortion Views of Gen Z & Y Voters

THE GENERATION MOST TARGETED TO SUPPORT AND BUY AN ABORTION ARE NOT COMPLETELY SOLD ON IT.

Issue by issue, about 1 in 5 will routinely say they are undecided. But again this year, almost 7 in 10 say they want limits on abortion. 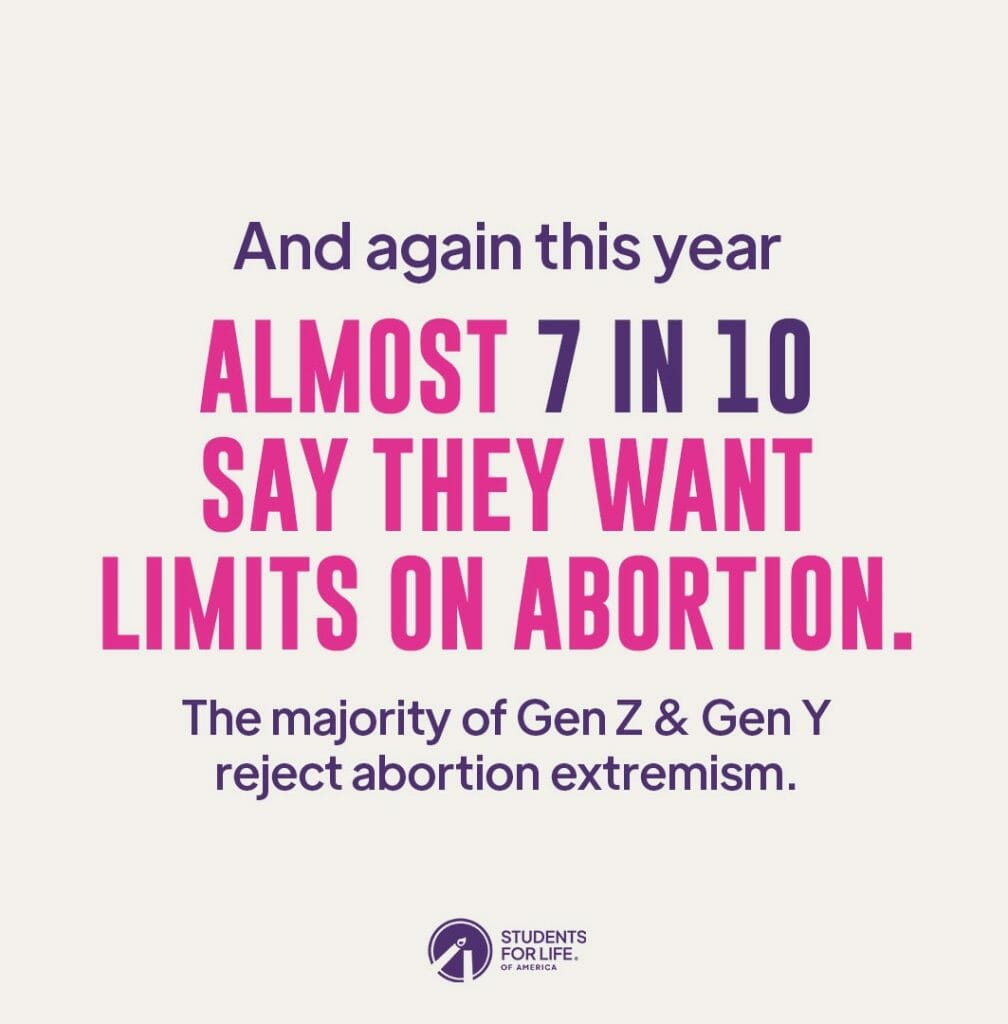 KEY TAKEAWAY: The Youth vote does not follow radical abortion extremism as advocated by the Democratic Party Platform or the policies they have pushed during Biden’s term in office. Despite much of the analysis of a single election cycle, the youth vote is nuanced and reachable, requiring resources and people to educate on the implications and realities of policy and it requires champions willing to make their case on LIFE. Consider that according to the Associated Press, an estimated $124 million was spent by the Democrats alone to push their narrative. But there is hope.

THERE’S CLEAR EVIDENCE THAT MINDS CAN BE CHANGED AND THAT YOUNG PEOPLE DON’T UNDERSTAND ABORTION IN AMERICA:

When it comes to Young Voters’ Views on Codifying Roe – making permanent the legal framework that existed as a consequence of Roe v. Wade and Doe v. Bolton, minds can be changed with information.

Roe allowed for abortion to take place in the U.S. through all 9 months, for any reason at all, and sometimes with taxpayer funding. Codifying Roe efforts in the House and Senate during former Speaker Pelosi and Sen. Chuck Schumer’s tenure also included attacking state laws, including those that address health and safety standards required for abortion businesses.

BEFORE THEY LEARNED MORE: Gen Z and Gen Y were first asked whether they supported Codifying Roe with no definition given on what that meant, and 52% strongly or somewhat strongly supported it, 26% undecided, and 22% opposing.

They were then asked a few follow up questions on support for: 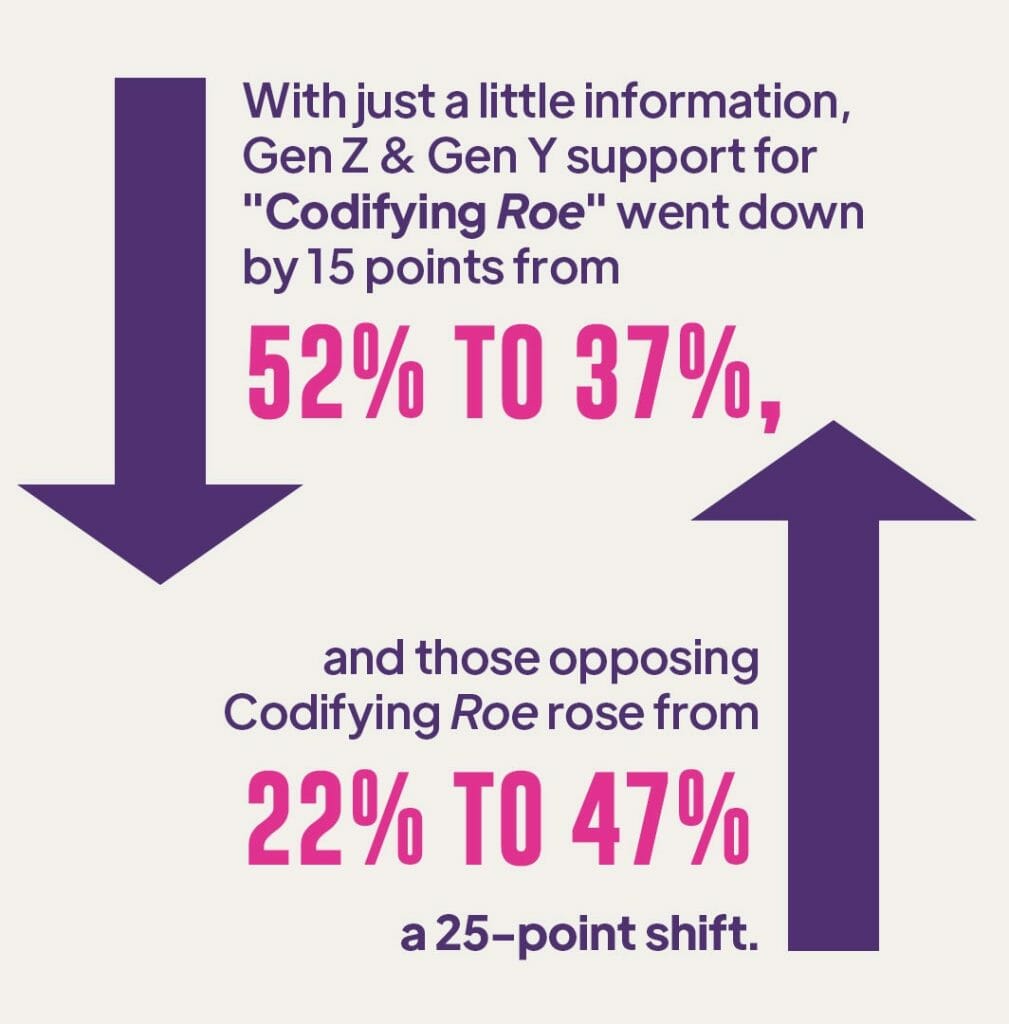 While their thoughts on some of the specifics of Codifying Roe were mixed, when asked again about whether they supported the extremism of Roe policy, their views had changed.

AFTER THEY LEARNED MORE: With more information, young voters changed their minds and the math flipped by 15 points as 37% supported “Codifying Roe” after learning more, down from 52%. Those opposing “Codifying Roe” rose from 22% to 47% — a 25-point shift, made possible in part as 26% undecided fell to 16%.

On Where They Draw Their Line

SOME SUPPORT FOR GESTATIONAL LIMITS: Almost 7 in 10 support limits on abortion based on a baby’s stage of development – with even more support for Life at Conception Protections than Protections based only on Fetal Pain. The milestones of a baby’s heartbeat or viability show strong support. Gen Z and Gen Y were asked when they thought a baby’s life deserved legal protection, and in this round, they chose:

BORN ALIVE PROTECTIONS FAVORED: Half of Gen Z & Gen Y support the goals and the penalties in the Born Alive Abortion Survivors Protection Act, while 18% somewhat or strongly oppose requiring life-saving care for babies born alive during an attempted abortion.

MONEY WON’T BUY YOU LOVE: Politicians thinking to buy the Gen Z and Gen Y vote with money for abortions won’t find it a sure thing. On taxpayer funding of abortion, almost twice as many oppose such funding as support it – 40% against to 23% for it, with 26% believing it depends, and 11% undecided.

MIXED SUPPORT FOR OTHER VOICES: Outside of government, 67% see some involvement (53%) and a great deal of involvement (14%) needed from non-profit organizations.

Gen Z & Gen Y wanted to hear a faith perspective by a margin of about 40% for to 60% against. In considering the self-interest of abortionists weighing in on policy that impacts them, 1 in 4 believe they should stay out of such policy, while 36% some involvement, and 38% support a great deal of involvement.

On Abortion’s Impact on Politics

Gen Z & Gen Y by a margin of 3 out of 4 believe politicians need to have a position on abortion.

HOW DO THESE YOUNG VOTERS REACT TO THE CANDIDATES’ VIEWS?

KEY TAKE AWAY: With so many undecided youth voters, there is a lot of room for education on the issues, and a strong base already in place to defend life among the youth vote. And many measures the media says won’t appeal to young voters have a base of support already.

EVENTS OF CONCEPTION DID NOT DEMAND ABORTION FOR ALL:

Despite claims that most voters insist on abortion when a child is conceived in rape and incest, the results indicated a strong base of support for preborn life no matter how a child was conceived. SFLA & SFLAction reject prejudice against people based on their age, sex, race, level of income, perceptions of their abilities, or the events of their conception. We reject shaming an innocent child for things outside their control, which do not diminish their humanity.

But how do our peers see it?

Looking at protections for women in a life-threatening pregnancy, where only one life can be saved, Gen Z & Gen Y by 32% said they could support a candidate who only advocated for that single exception in the law. When asked their views on support for a candidate who would allow abortion for reasons of rape and incest, as well as to save a mother’s life, that support raised only 2 percentage points, to 34%.

Taking the principled stand to advocate for people despite events out of their control didn’t change the level of overall support among the youth vote. 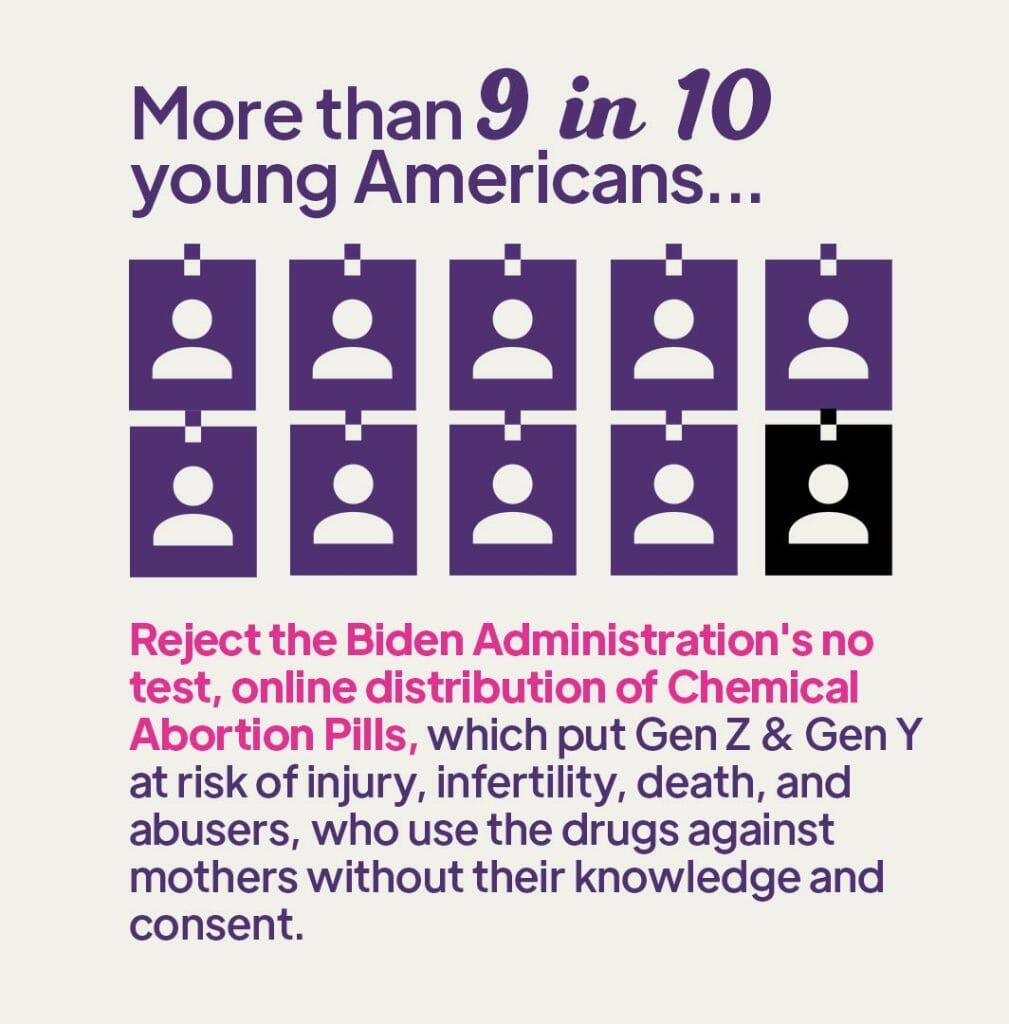 THE DEMOCRATIC PARTY PLATFORM AND AGENDA OF THE BIDEN ADMINISTRATION WAS NOT A WINNER:

Asked whether they could support a candidate who wanted abortion without limits and no restrictions of any kind, 4 in 10 reject that extremism, reporting that they are UNLIKELY (extremely to slightly) to give their vote. And 35% said that their vote was unlikely to go to someone promising taxpayer funded abortion, which is littered throughout our federal budget.

As noted above, in 2023, MORE young people now believe abortion should not be legal, now at 23% compared to 9% in 2022. The radical agenda of the Democratic Party is out of step even with those presumed to be their most ardent supporters.

THE LEGISLATION DEEMED CONTROVERSIAL BY THE MEDIA IN RECENT HEADLINES IS OF INTEREST TO ABOUT ONE-THIRD OF THE YOUTH VOTE: